Musings on my grandmother

I am officially on university holidays until the beginning of March! Bliss! Second year is done. I study medieval history, which I love, but it will be nice not to have divide my brain between medieval politics and crafty stuff for a while. It also means I'll be able to finish a lot more projects, as well as blog about them.

To start, I thought I'd talk a bit about one of my main holiday goals; to get my sewing area fixed up. I currently have to play nimble footed hopscotch to get through, the reason being earlier this year, I inherited my grandmother's sewing room. Basically, I owe all of my sewing I have done over the years to my grandma.

She grew up during the Depression, and after finishing school early, she worked for fifteen years at David Jones (Australia's biggest department store) as a sample machinist, where she learnt dressmaking. When she had her own family she sewed to support them; often wedding dresses. She would sew for the entire bridal party, including the mother of the bride. The last wedding dress, which she made for my Mum, was exquisite. She also made dresses for her four grand daughters when we were younger, perfectly hand smocked, which I now have packed away for my future children.

Seventeen years ago she moved from her property into a retirement village, and it was here she took up patchwork, which she excelled at, Her output was prolific. She taught me to sew around this time. I cannot remember how it all started; I cannot remember not being able to sew. When I was around nine, she paid for me to go to patchwork classes at our local patchwork shop, which I went to every week for ten years. I can  never thank her enough for doing that for me; what I learnt there, and was able to make was so valuable. I continued to sew with her as well though, and she taught me English paper piecing, a great love of mine, as well as letting me raid her sewing room as much as I wanted to. She loves the fact that I sew, as I'm the only one in the family that's taken it up after her. She praises and compliments me all the time, but woe betide if I've left my threads uncut, or my points don't exactly match..... She is the most insane perfectionist I have ever met, and in many ways I am very grateful I am teaching myself dressmaking, and not her.

She hasn't sewn for a number of years now, perhaps five. At the time we thought it was because her arthritis was really bad, and she couldn't bear to not be able to carry out the extremely intricate work she used to be able of, but now we are wondering if a lot o it was to do with her Alzheimers when it would have been in its early stages. It's so sad that she stopped, and she hates being idle, never watches TV, and read one book in her entire life.

Earlier this year we had to move her into a hostel, and she was delighted that I'd be taking all her sewing supplies. There It's an incredible stash, one dating back decades, and full of half made projects (many which I am planning to complete) notions, sample tucks from blouses she made for my mum thirty years ago, insertion, baby dress patterns etc. When we were moving she was so concerned about how messy her drawers were, to which I had to reply "your buttons are in colour coordinated jars"

When I see her, I take my sewing, and we fuss over it together, and it's this lovely bond that we both share. She still bugs me about my points, and loves to hear what I'm up to, and my sewing plans but she has hardly any recollection that she ever sewed, and I'm constantly attempting to jog her memeory, that she taught he all this, and she was much better than I will ever hope to be.

These holidays I want to get everything ordered, merge her stash with what my Mum and I already had, and start sewing my way through it. What she's left me is this great sewing legacy, and I want to be able to share it with her.
Posted by Kaitlyn at 16:03 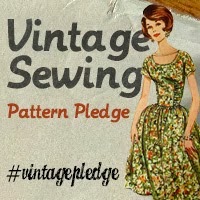